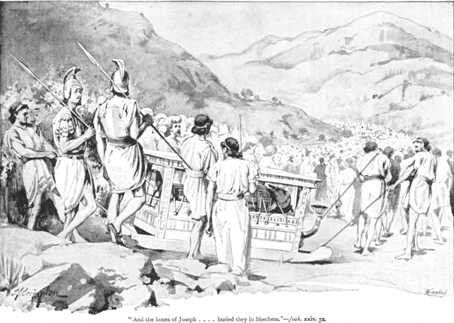 There is a beautiful passage in this week’s Torah portion that reads like this:

” And Moses took with him the bones of Joseph, who had exacted an oath from the children of Israel, saying, “God will be sure to take notice of you: then you shall carry up my bones from here with you.”

This is a great verse and it yells out for commentary.  Our Sages do not disappoint.

A Hassidic commentator writes in Oznayim LaTorah that many who left Egypt were still carrying the psychological burden of bondage and thought of themselves as slaves rather than free people.  However, when they looked upon the coffin carrying the bones of Joseph they straightened their backs and stood upright in the knowledge that he, one of the very same Jewish people of which they are part, had become great royalty.  His bones reminded them of their princely heritage, who they were descended from, and what their own potential was.

It’s a wonderful commentary because it touches upon the very nature of what it means to be inspired.  ‘Inspired’ comes from the Latin word meaning ‘to take in the Spirit’ – i.e., God’s spirit.  What a beautiful image.

When we are inspired by the divine and we open ourselves up to the possibility of expanding beyond ourselves, we make holy connections that add depth and meaning to our lives.  Many of us find it through study of holy texts or literature or science.  We are touched by the insights of others who reveal things to us about ourselves and our world that we never imagined.  This is the voice of God.  Many of us find it through giving of our skills and resources and engaging in active acts of perfecting the world.  This, too, is the voice of God.  And some of us find it in a place that few of us would even consider looking.  Let me explain.

The other day, one of our congregants who is very much into home farming wanted to begin synthesizing Torah and mitzvah with his farming.  In all my years as a rabbi, this was the first time I was asked a question about the mixing of different varieties of grapes in a single furrow and the difference between the width of Hillel’s furrow and Shammai’s furrow!  But we studied the relevant Mishnah text and began a journey of understanding that there is not only a practical reason and sound scientific reason for many of the laws of farming, but also an ethical one.  This young man had not considered these but with some careful study (which will continue into the next few months) and new holy dimension was found in the tomatoe.  That is, you should pardon the pun, the ripening of Torah and that is the voice of God coming forth from the earth.

And so the question that is always present presents itself again: How do you hear the voice of God?  But the first question before we get to even ask ‘how’ is ‘Are we even listening?’  Listening means opening up and letting the still, quiet voice of God be heard.  You may find it anywhere you look.  But you still have to look.