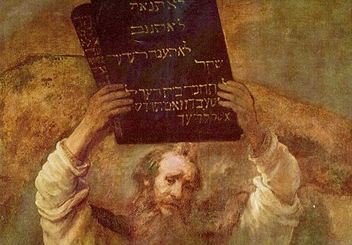 There is a silly word game that kids sometimes play.  One child creates a sentence and then, going down in a line, the next child adds their own sentence.  In short order a story is created and there was no way to tell if it would be funny, dramatic, or even meaningful.  As we move through the Torah, even though we know where the story is going we read it with different eyes each year.  The Torah’s words stay the same but its meaning changes and from parasha to parasha and from book to book we don’t know what the text will teach us.  Each week is a new Torah even though the words stay the same.

This week begins the book of ‘Shemot’ – the book of ‘Names’ commonly known as the Book of Exodus.  Why begin the story of the Exodus, Moses and the first travels of the Jewish people with a list of names?  Is the Torah trying to teach us anything?  I believe it is.

You see each of these names is one of our ancestors.  In a very real way, we are reading the story of our parents.  We are looking at a literary photo album and it is good to reflect on where we came from and where we are going.

I just came back from seeing my father in Toronto.  Along with my sister and daughter and brother-in-law, we found ourselves around the dining room table and somehow an old box filled with photographs appeared.  (Apparently there are about 7 or 8 of these huge boxes filled with pictures but only one appeared.)  Little did we know how meaningful and funny it would turn out.  There were pictures of grandparents and great-grandparents, old friends, relatives and places.  (My sister found her old religious school report cards which caused no end to the hilarity based on the teachers’ comments such as, “Margot would speak much better Hebrew if she took the bubble gum out of her mouth!”)

But as the hilarity died down I got a bit reflective.  I wondered how these people, many of them gone now, would say if they suddenly reappeared and saw the people they touched, raised, and affected with their own lives.  What would they say?  Their lives were but one word, one name in a long, long chain of life and those living now are but the latest link in the Jewish chain.  It was a chain that, in a way, began in Egypt with Jacob’s descendants and leads to us.

I wonder what they would think.  They forged a covenant with God at Sinai and gave it as a gift to us.  Would they see us as worthy inheritors of the covenant and struggling with God to derive its meaning?  I would like to think so.

We are one part of the covenant.  We also carry the Names of Those who descended into Egypt.  Their gift is our inheritance.  Their Torah has become our Torah.  Are we struggling still to draw wisdom from its wells?  Or are we not interested in the struggle because life is too easy for us and we expect wisdom to simply appear?

The beginning of the Book of Names – Exodus is the beginning of the struggle.  It is a struggle that can never end for the covenant with God can never be fully and finally defined.  The struggle is eternal and that is the destiny of the Jew.  It is a holy struggle and, through it, we create our own Name to add to the venerable generations before us.  In this way, we will hand down our Torah to those who come after and, when they see our pictures in the box in generations to come, they will say, “A Torah was given to us by Moses but passed through their hands and minds in was made even more holy.”