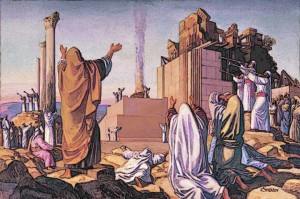 Picture from the Temple Institute

This week’s parasha is interesting in that the text tell us the following:

18 Isaac dug anew the wells which had been dug in the days of his father Abraham and which the Philistines had stopped up after Abraham’s death; and he gave them the same names that his father had given them.
19 But when Isaac’s servants, digging in the wadi, found there a well of spring water,
20 the herdsmen of Gerar quarreled with Isaac’s herdsmen, saying, “The water is ours.” He named that well Esek, because they contended with him.
21 And when they dug another well, they disputed over that one also; so he named it Sitnah.

This has got to be more than just a description of Isaac playing in the sand.  Indeed it is!

Nachmanidies – usually pretty negative in most things he says – does not disappoint.  He tell us that this story tells us nothing about Isaac’s greatness or his accomplishments.  But, he goes on, there is a hidden matter in this story.  The unplugging of the wells was to teach us about future events.  How so?

The story tells us about 3 wells.  The Sages tell us that these refer to the 3 Temples in Jerusalem. The first well – the first Temple (built by Solomon)- was called ‘Sitnah’ which means ‘contention.’  Why should a Temple – the place of peace – be called ‘contention’?  Because, Nachmanides says, the nations of the world contented and fought us until the First Temple was destroyed.  The second well refers to the Second Temple (built by Ezra and Nehamiah and renovated by Heron) and was called ‘Sitnah’ – enmity or hatred.  Why was this temple known as ‘enmity’?  Nachmanides tells us that it was because of the hatred the Roman had for the Jews and when they destroyed the Temple, the exile in 70 CE devastated the Jewish people.  But the third well he called ‘Rechovot’ – broad spaces.  You see where this is going.  Isaac opened up the third well and foretold the Third Temple which will open and expansive and its message will embrace every nation on the face of the earth.

As Reform Jews, the physical Temple itself has lost its meaning.  We don’t do sacrifices anymore and there is no authority in the priesthood.  Even Maimonides agrees with this.  So why should we even study this stuff?  Because its message – if not its literal meaning – can mean something to us.

When we ‘unplug’ the wells in our Jewish lives that have been ‘plugged’ up by others, we discover new and beautiful waters.  We see God and Torah and the Jewish people in ways we have never seen or supposed.  How many of us have heard stories about ‘such and such a rabbi or such and such a teacher who turned me off of Judaism and that’s why I only call myself a Jew by birth’ or something like that?  This passage teaches us that sometimes we have to actively take out the plug that’s holding you back from a fulfilling and meaningful relationship with God by first recognizing that we have matured in all things except our faith and Judaism.  We are still hanging on to, what, our grade 5 notions of what Judaism is because we had a lousy teacher?

There is beauty in the wells that our teachers have given us if we would only take the time to rediscover them and open them up.  There are infinite ways of being Jewish and to dismiss them all because of something that happened decades ago with a lousy teacher is a loss for you, for the Jewish people and for God.  Indeed, when you keep your Jewish selves plugged up with all the stuff and misinformation you collected from years ago and never bothered to remove, God misses out on your participation in the covenant.  That is truly sad.