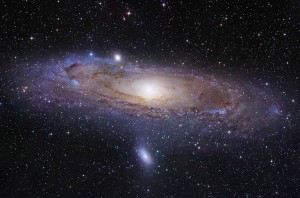 I am a science freak.  I love science.  I always have.

I am also really bound to Jewish learning and tradition and knowledge.

So how do I reconcile the story of Genesis and the Jewish part of my soul?  The answer is simple: I don’t have to reconcile it since there is no conflict.

This is not to suggest that the stories in Genesis are in any way scientific.  They aren’t.  When they were written, it was probably the very best explanation of that the writers had.  After all, where would everything come from if not from God?  It makes perfect sense.

In fact, it makes perfect sense to a lot of people even today.  When my daughter and I were in Kentucky, we passed by the Creation Museum which purports to harmonize the literal account of creation in the Bible with the fossil record.  What this means is that there are models of little children riding on dinosaurs.  Really.

The absurdity of the thought is beyond words.  Science is manipulated to fit a religious agenda.  Fossils were put on earth to deceive us into thinking that the world is older than 6,000 year.  Light traveled faster than the speed of light in the past (there is no evidence for this, by the way).  Noah built an ark exactly as described in the Torah and everything fit in it because animals were smaller.  Darwin and the theory of evolution are only ‘theories’ (betraying an ignorance of what a theory is in science).  The list goes on and on.

Science is not meant to support a religious agenda.  It is a search for objective truth.  The creation story may have been seen in the past – and may still be seen by some – as objective truth but today, there is no way to accept it – except those who are truly looking for their religion in distorted science.

So what do I do with the story of creation?