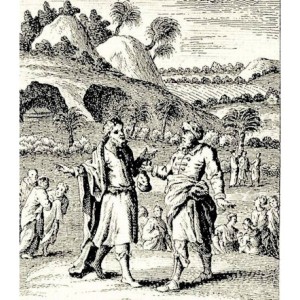 The Torah portion for this week is Chayei Sarah which, although it translates into the “Life of Sarah” really records her death and burial at the Cave of Machpela.  In this portion, Abraham buys the cave from Ephron the Hittite.  The negotiations are concluded for 400 shekels of silver (a huge price, by the way) and Abraham buries and mourns his wife.

Commentators have asked why the Torah text does not simply say that Abraham bought the cave.  Why all the detail?  They answer by saying that the text records the negotiations so that no one could ever dispute the legality and legitimacy of the purchase.  In other words, should anyone suggest that the purchase was forced or illegal, then this text definitively disproves that notion.  This text is the deed of sale.

It is hard to believe that this very text is at the center of the claim of the Palestinian Authority which teaches its people the great lie that Jews have no connection to the Land of Israel.  The text seems to know that, in the future, there will be those who claim no Jewish presence on the Land, let alone, Jewish rights.

Jews have always been in the Land of Israel, long before Christians and long, long before Moslems.  Even in the darkest days of the Exiles from the Land, the Jews were still present.  In fact, there has never been a moment when all the Jews were expelled from the Land.  Although the Palestinian propaganda would love for everyone to believe that Jews don’t belong in Israel the very text that they say is one of their holy texts (they recognize the Torah as an authentic religious text) should disabuse them of that notion.  That is, unless you want to change history.

But the truth is not changed, no matter what propaganda is uttered.  The Palestinian Authority teaches not only that Jews have never been in the Land, it teaches that the Temple Mount never existed, that Jews are not really descended from Abraham, Isaac, and Jacob and that the mosques on the Temple Mount existed from the moment of creation.  Unbelievably, they create midrash and then take it literally.

To be fair, Jewish midrash has taught that Jerusalem in the center of the world.  It also teaches that the mountain upon which the Temple was built – Mt. Moriah – was chosen from the beginning of time to be the place upon which Abraham would take Isaac for the Akeida.  The differenceis that Jews generally don’t take midrash as anything but allegory and metaphor.  It never determines Jewish law and no halacha (Jewish practice) can be derived from it.

When the Jews were in Europe, the Europeans screamed, “Go to Palestine.”  When the Jews settled the Land of Israel, the Arabs scream, “Go back to Europe.”  But the reality is that the  Jews are in Israel to stay.  Abraham started the settling of Land by buying a cave.  No amount of disinformation or propaganda can change that.  Whether the Palestinian Authority will ever accept that fact remains to be seen.  But with the current generation of ‘leaders’ in the PA, I am not very confident that they can ever get out of their own way as they are now bound to their people by their own lies.