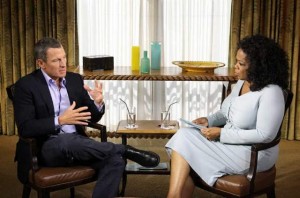 It has been all over the news in the past couple of weeks: Lance Armstrong is a liar and he admits it.  Well, I must say that knowing what we all know about him lately, it is not very surprising that he is a liar and consistently lied about his doping throughout much of his cycling career.  In fact, from what I hear, everyone in the know in Europe knew since it was standard practice across the pond to dope.  He even dropped hints in Europe and everything was ‘wink, wink.’  Not so in America.

Apparently at home, Armstrong not only vociferously denied his invovement with drugs – we now know how much of a blantant lie that it was – but to add insult he also mowed people under, ruined lives, destroyed careers and tarnished reputations so he could keep his facade.  Doping in sports is hardly the epitome of sinful activity and there are arguments to allow it in professional sports.  Destroying lives, though, are Armstrong’s real sins and no number of Ophrah appearances will fix the damage he has done.  To add to astonishment, he admits that he is admitting to using drugs so that he can get back into competition.  I am shaking my head in disbelief.  Oy vey!  Let me get this right: He lies and destroys lives, he manipulates people, he drugs and then he admits that he is admitting it so he can engage in sport once again where he has shown that he destroys anyone who questions him.  His admission is not repentance.  He sees admission only as a step toward payday.

As Jews, we know the value of repentance.  But repentance is not about admitting lies.  It’s about admitting faults and then doing our utmost to fix them first and foremost by going to the people whom we have hurt.  There is no public display of repentance.  The real work happens in the lives that have been damaged.  That is why Armstrong is continuing to lie – only this time he is lying to himself since he telling himself that if he comes out and sounds repentant, he deserves our adoration and adulation once again.

Pharoah had the same problem.  In this week’s parasha, Phaorah has finally allowed the Israelites to leave Egypt after continual evasion, deception and self-delusion about his infinite power, a convenient lie he told himself over and over again.  Moses saw right through Pharoah and with strength and honor and integrity led the Jews to freedom.  Moses did not want the praise, he did not want the glory and he never really wanted to be in charge in the first place.  But he got all three.

Our Sages say that it was his humility that earned him the honor of leading the people and being chosen by God.  We see this humility over and over again and, in this week’s parasha, we see it when the text tells us:

And Moses took with him the bones of Joseph, who had exacted an oath from the children of Israel, saying, “God will be sure to take notice of you: then you shall carry up my bones from here with you.”

Rabbi Moshe Feinstein teaches that Joseph really had no reason suspect that the Children of Israel would not properly take care of his bones when they ultimately left Egypt.  The Talmud asks the same question.  But Rabbi Feinstein adds that Joseph, in his great humility, never thought of himself as the savior of the Jewish people and that the Jews would never owe him anything.  He saw himself as a servant of God, not a savior of his people.  Saving Israel was simply his task.  So when Joseph said that he needed someone to take his bones, it is really an expression of his humility since he believed no one owed him anything.  Moses literally takes Joseph’s bones with him and is literally and symbolically picking up Joseph’s humility and carries it with him.  It is a good lesson for all of us.

Often people think of themselves deserving of great adulation – and they may be deserving of it, indeed.  But there is never a case when voluntary adulation lasts forever.  The reality is that we can be heroes one day but forgotten the next.  That is the way the human animal works.  But the truly great are the ones who serve in unexpected ways – they pick up bones, they walk with the righteous, they stand up to power.  The truly sincere do not do it for a name but rather because it is the right thing to do.

Lance Armstrong believes he is doing the right thing because he uttered a few words admitting he is a liar.  But then he follows up and gives away the real reason: he wants the opportunity to compete again.  As my mother of blessed memory was fond of saying, ‘Shoyn vata!’ – ‘Here we go again.’  I used to believe Armstrong when he denied his drug use.  I used to believe he was sincere.  Now I don’t listen to a thing he has to say.  He never really learned what repentance is all about and I think his humility is non-existent.  There is still time for him to repair what is broken but I don’t think it will ever happen.

Let his experience be a lesson for all of us.  None of us should be above picking up bones.