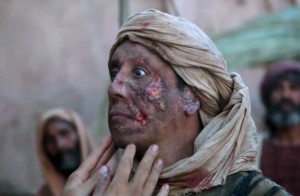 One of the ‘impossible to teach moments’ for any rabbinic student is what to say to a parent or a kid who has the Torah portion for this week.  It is filled with all sorts of gross stuff.  It is heavily into the ‘ewwwwww’ factor.  Let’s see we start off with a woman who is impure from childbirth.  We continue with skin growths that look like leprosy.  Gross marks on the skin.  Diseases of the hair on the chin and on pretty much all other body parts.  And, of course, gross colors on one’s clothes from such diseases (and not just gross colors on the clothes because it is a Hawaiian shirt!).  I mean, really, what bar or bat mitzvah kid really wants to read about all that gross stuff?

It had been hard to answer these kids.  But then it occurred to me that each of these laws and diseases – gross as they were to imagine – also had a cure of sort.  The priest would look and determine if the disease had passed.  After it had, the person was welcomed back into the community.

Admittedly, the science is questionable to say the least.  But what is more troubling is that hte person was excluded from the community until they were cured.  It seems like you are punishing the patient.  But it only seems that way.  Since medicine was hardly at the stage is it now, this was the best way to guarantee that whatever they had was not ‘catchy’ to everyone else in the village.  It was rudimentary but fundamentally sound germ theory.

So, knowing this I also considered today’s curers of disease.  The great thing about many of these kids, is that there is almost always at least one doctor in all their families.  I sometimes had them ask their relative – often a father or mother or grandparent – to describe what they do every day.  Often, the responses have been quite graphic.  I have heard stories from the kids from their relatives who surgeons, dermatologists, proctologists, podiatrists, and ENT’s, among others.  Once the kids realize just how graphic real life can be, they are pretty sympathetic to the Torah portion.

It is then that these young men and women begin to understand what it means to be ‘a kingdom of priests and a holy people’ as the Torah calls every one of us.