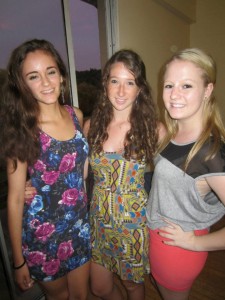 Mechina 2012 was simply the beginning to an incredible summer of learning. During Mechina, I was given the opportunity to learn from other regions as well as network. I loved meaning individuals from other regions of North America, especially those with similar positions to myself. In addition, I built friendships and cannot wait to reunite with my friends from the NFTY General Board in LA during NFTY Convention 2013, which everyone should attend! Because of Mechina 2012, I will most definitely start this year as a more confident leader. — Jenna Wyatt, NFTY-GER’s Membership Vice President

Last month, I had the honor of representing NFTY-GER and SALTY at Mechina. Mechina means “preparation”, and is a North American event where all the regional boards from the 19 NFTY regions and North American board come together and begin the NFTY year together. At Mechina, each position meets with his or her own network, which is everyone from across North America that holds the same position as you. I am the Fundraising Vice President for NFTY-GER, so I was in the MCFVP Network, Membership Communication and Fundraising Vice President network, the biggest network. For majority of the five days, we are with our network planning for the next year on a personal, regional and North American level. For most of the network time, the MCFVP was split up into three smaller networks, Communications, Membership and Fundraising networks. Network time was very insightful. There were eight other Fundraising Vice Presidents at Mechina and I found it very helpful to learn what the other FVPs do, what merchandise they sell, and what has their region done in the past that was very successful. Aside from network time, I got to meet so many great people from all across North America. Mechina was so much fun. I learned a lot about myself, my position, regional board and NFTY on a North American level. I can not wait until convention, the next time the NFTY General Board comes together. — Scott Gillet, NFTY-GER’s Fundraising Vice President

I went to Kutz in 2010 for the Songleading major, and I have gone to numerous NFTY events at the Kutz campus, so I am familiar with building names and camp traditions. However, stepping through the Kutz gates for Mechina was a unique experience; I was attending the event as a leader, to learn how to lead the NFTY-GER region successfully. At Mechina, we had speakers from the Campaign for Youth Engagement and other organizations to make presentations to us. The NFTY North American Board had their induction ceremony, and we all came to the realization that the future NAB members were in that room. I spent quality time with my network, learning the best ways to communicate with Communications Vice Presidents and Secretaries from all over the country. I made new friends and reconnected with old friends. We all have a special bond because of our excitement regarding the upcoming year; we cannot wait to lead our regions. — Maris Krauss, NFTY-GER’s Secretary